The Atlanta Hawks will host Southeast Division rival Orlando in the Hawks’ 2019-20 home opener on Oct. 26 at State Farm Arena, the National Basketball Association announced today. Two nights prior (Oct. 24), the Hawks begin the regular season in Detroit against the Pistons.

The Hawks are also away from home during Thanksgiving week, traveling to Milwaukee (Nov. 27), Indiana (Nov. 29) and Houston (Nov. 30).

Atlanta takes on the Dallas Mavericks twice in February, once before the NBA All-Star break (Feb. 1) and once after (Feb. 22 at State Farm Arena).

The complete regional television schedule on FOX Sports Southeast and the FOX Sports GO app will be released at a later date. All games will air on the Hawks’ radio flagship 92-9 The Game and the Hawks Radio Network, with “Voice of the Hawks” Steve Holman and pregame, halftime and postgame host Mike Conti.

All of Atlanta’s Monday-through-Saturday home games will feature 7:30 p.m. tip times, with the exception of the Halloween contest vs. Miami (7 p.m.) and Monday, Jan. 20 vs. Toronto (2:30 p.m.). Sunday game times will vary. 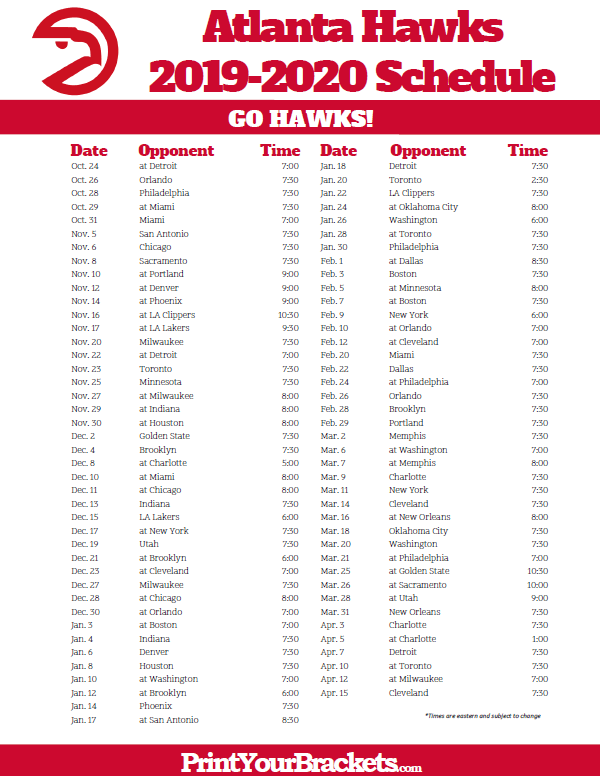 After playing six-of-the-first-eight games on the schedule at home, Atlanta makes its longest road trip of the season, heading west to visit Portland, Denver, Phoenix, the LA Clippers and LA Lakers from Nov. 10-17. The Hawks have a stretch of seven-of-nine contests in Atlanta between Feb. 26 and Mar. 14.

The Hawks play 14 sets of back-to-backs, including two home/home, four home/road, three road/home and five road/road. The busiest month of the home schedule is January (nine games), while the Hawks will play a season-high nine contests away from home in November.

The first half of the schedule ends following a Feb. 12 contest at Cleveland, and the second half resumes following All-Star Weekend on Feb. 20 vs. Miami.

The 2019-20 Hawks Flex Plan gives fans the opportunity to select seats for their 10 preferred home games at a savings over the single-game price. Fans looking to purchase a Flex Plan should place a deposit in order to be one of the first to have access to the best available seating locations starting Thursday, Aug. 22. Every Flex Plan holder gets access to a dedicated concierge to ensure the best seats and pricing. Plus, State Farm Arena is home to the No. 1 game experience in the NBA as determined by fans. Learn more and place your deposit at Hawks.com/Flex or call or text (866) 715-1500 to speak to a Hawks representative.