“It was very fulfilling to witness the children’s excitement,” said DeWayne Griffin, Enterprise Technology Executive at State Farm. “Creating smiles and inspiring young minds to dream bigger dreams is what this is all about. This is why local State Farm agents and employees are excited to once again partner with the Atlanta Hawks to unveil our fourth Good Neighbor Club over the past four months.”

The Atlanta Hawks Foundation is committed to providing ongoing programming to the communities that surround the more than 25 Hawks-renovated courts in Metro Atlanta. In partnership with State Farm, the Hawks are transforming rooms in the recreation centers attached to the courts into Good Neighbor Clubs (GNC). These clubs serve as comprehensive learning and entertainment hubs for the community and are an extension of the team’s ongoing court renovation program designed to create increased access to play throughout Metro Atlanta.

“Being able to partner with State Farm to host our ‘Season of Giving’ event and open a Good Neighbor Club at Bessie Branham Park during the holidays is an honor,” said Andrea Carter, Vice President of Corporate Social Responsibility at the Atlanta Hawks. “We are privileged to be able to give back during this special time of the year and continuously provide access to play and a safe space to learn within our Good Neighbor Clubs throughout Metro Atlanta.”

“On behalf of the citizens of Council District 5, I am pleased the Atlanta Hawks and State Farm selected the Bessie Branham Recreation Center for its newest Good Neighbor Club for youth,” said City of Atlanta Councilmember Natalyn Archibong. “Nestled in the heart of the community of Kirkwood, Bessie Branham is one of the busiest park facilities in this district. The addition of this newly-renovated space will have a significant and beneficial impact on the health and wellbeing of the youth in our community who wish to express themselves through creativity and dance.”

As part of the festivities, more than 200 local children were surprised with custom basketball jerseys, backpacks and a host of other giveaways provided by the Hawks and State Farm as a part of the ‘Season of Giving’ event. A silent disco was held in the renovated dance studio and the ATL Dancers, 404 Crew, Silver Classix Crew, Harry the Hawk and the Atlanta Hawks Flight Crew were on-site to perform for the crowd and put on dance clinics throughout the afternoon. Hawks players Bruno Fernando and Jabari Parker distributed holiday gifts to children and interacted with everyone in attendance both inside the Good Neighbor Club and in the gym.

To learn more about the Hawks work in the community, visit Hawks.com/community. 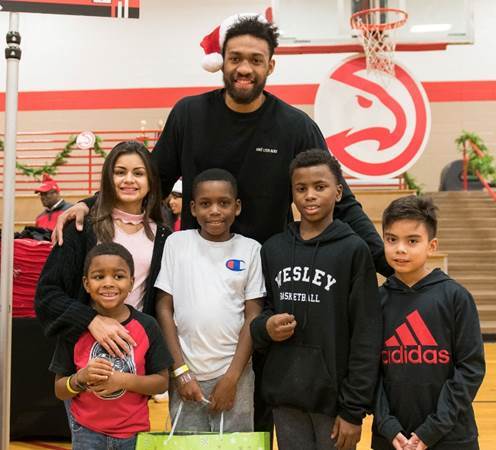